Shola is one of the four playable survivors in Zombie Army 4: Dead War.

A skilled engineer, Shola’s got a gift for decimating the dead, and one hell of a rebellious streak!

Shola’s background could not be more far removed from Boris’s as she was born into prosperity. The daughter of a wealthy Nigerian barrister and privately educated in England, you could be easily confused as to her incentive for fighting the undead menace. During the outbreak of World War 2, Shola volunteered in a munitions factory. When the undead reared their rotten heads she was reassigned to Italy as an engineer. Despite being clearly highly educated and well spoken, Shola also has a rebellious side which makes for her ideal inclusion within the team. 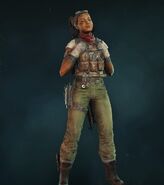 Add a photo to this gallery
Retrieved from "https://zombiearmy.fandom.com/wiki/Shola?oldid=595"
Community content is available under CC-BY-SA unless otherwise noted.